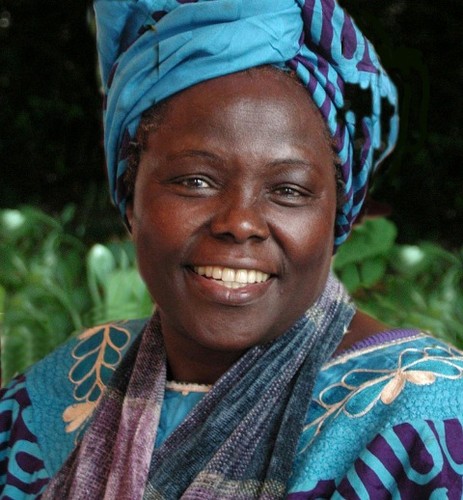 It’s time to pause and recall the life and spirit of Wangari Maathai, who died of cancer Sunday in a Nairobi hospital. Here’s her Times obituary, by Jeffrey Gettleman, our Nairobi bureau chief.

Maathai is best known for creating the Green Belt Movement, which has planted tens of millions of trees around Kenya, but she also personified a positive strain of environmentalism that stands out in a world where “woe is me” messages dominate. Click on the video clip above for a sample.

Her work centered on improving the lives of women, building a sustainable relationship between people and the land and education. Maathai won the Nobel Peace Prize in 2004 for her efforts. I encourage you to read the defense of her prize, which was criticized by some, from Anna Lappé and Frances Moore Lappé of the Small Planet Institute. Here’s a snippet:

Maathai’s genius is in recognizing the interrelation of local and global problems, and the fact that they can only be addressed when citizens find the voice and courage to act. Maathai saw in the Green Belt Movement both a good in itself, and a way in which women could discover they were not powerless in the face of autocratic husbands, village chiefs and a ruthless president. Through creating their own tree nurseries – at least 6,000 throughout Kenya – and planting trees, women began to control the supply of their own firewood, an enormous power shift that also freed up time for other pursuits.