After his recent expulsion from the ANC, former ANC Youth League leader Julius Malema, who has never been known for his humility, said the people of South Africa should treat him in the same way that they had treated Nelson Mandela. In reply, the cross-dressing comedian Evita Bezuidenhout said: "What a great idea. Let's start with 27 years in jail …"

Here is a moment in South Africa's contemporary history that would surely have made it into Nadine Gordimer's new novel had Malema's expulsion not happened after her book was finished. For Malema, and South Africa's president, Jacob Zuma, stalk the pages of No Time Like the Present. Gordimer, Nobel laureate and one of the best-known chroniclers of apartheid, turns her hard-eyed gaze on post-democratic South Africa. Each beat of Zuma's march to power, each accusation against him of bribery or of rape, along with his suspension from government, his constant repetition of the resistance song "Bring Me My Machine Gun" that helped him on his return to power, are picked over and reacted to by the book's cast, as is Malema's insistence that he would, if necessary, "kill for Zuma".

Politics, and the way they play out, are the lifeblood of the couple at the centre of this book. He is Steve, white son of a Jewish mother and a Christian father, who, having used his knowledge of chemistry to make explosives for the ANC, now teaches science to under-prepared university students. She is Jabulile (Jabu for short), beloved daughter of the patriarchal Baba, who defied his people's customs to send her across the border so she could get a proper education, after which she joined the ANC. There in Swaziland, she also met and married Steve, their lives defined by the needs of the exiled movement.

Continuar a ler no La Nacion.

Continuar a ler no La Nacion.

Chimamanda Adichie: "The danger of a single story" 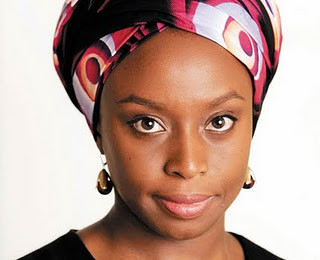 Our lives, our cultures, are composed of many overlapping stories. Novelist Chimamanda Adichie tells the story of how she found her authentic cultural voice -- and warns that if we hear only a single story about another person or country, we risk a critical misunderstanding.