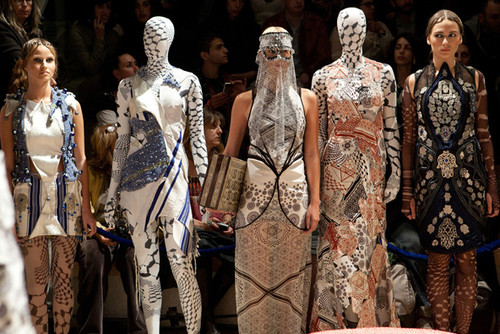 On Sunday night, the fashion collective Three as Four opened its highly anticipated exhibition “Insalaam Inshalom” at the Beit Ha’Ir Center for Urban Culture in Tel Aviv, bringing to fruition a project over two years in the making. Covering the walls of the four-story building in fabric printed with their spring collection’s central motifs, which are made of a mix of Muslim and Jewish symbols, the designers Gabi Asfour, Adi Gil and Ange Donhauser invited 10 artists to show works that relate to the project’s central notion: that Judaism and Islam can live side by side. “We’ve accumulated the energy of artists and performers who are like-minded,” Asfour said. “We tried to balance things from all sides, though it’s always difficult.”

Featured in the show are pieces by Yoko Ono, Joseph Dadoune and Jessica Mitrani, to name a few. Installations, video works, textiles and photography are among the works on display throughout the center’s “Insalaam Inshalom”-patterned walls. The performers at Sunday’s event included the Cyprus-born, New York-based director/choreographer Maria Hassabi, who wore cotton overalls from the Three as Four collection. Carrying a rolled-up rug on her slight frame, she slowly made her way down a flight of stairs into a cramped performance area, stopping every few seconds in different sculptural positions. Having arrived, she released the rug behind her back and wrapped herself in it as in a cape. At other moments she lay on it as well as under it as if it were a blanket.