Accra and its artists

Próximo Futuro
The late Ghanaian photographer, J.K. Bruce Vanderpuije set up his Deo Gratias Studio in 1922 and made good portraits of the nobility of Accra. He recorded its pristine beaches and important colonial edifices such as the Post Office, High Court buildings, social gatherings and so forth. From the 1950s and decade of Ghana’s independence from British colonial rule, Accra has had it’s ups and downs. A thriving cosmopolitan centre, it boasted of Indian and Ghanaian companies such as Bhojsons & Co (Gold Coast) Ltd., with branches in Onitsha, Lagos, Jos, Kano Port Harcourt, Ibadan and Warri – and beyond - Manchester, Madras, Osaka and in Hong Kong. Or, take Tarzan Transport (Ghana & Nigeria) that offered annual services to Mecca, stopping at Sudan (El Obeid). With the supermarket ‘Lilarams’, ‘all your shopping problems can be solved.’ A local décor firm, Kumi (1952) Ltd., dealt in tableware and furnishings. 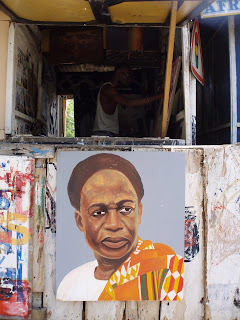 The Savoy at Osu, Caprice at Alajo, were hotels from the 1950’s, decorated by Yemo Kwei Anang with portraits of Ga King Nii Tackie Komey II and celebrities like Louis Armstrong. In 1957, Kofi Antubam and his students from Achimota School painted murals on nationalism at the Ambassador Hotel near the Ridge. Today, private art galleries are conspicuous landmarks in Accra. Around Asylum Down is the ‘Step-in-Gallery’ owned by artist, Nicolas Kowalski. Ablade Glover’s Artists Alliance Gallery is a magnificent location by the ocean front in Labadi, coupled with the Foundation for Contemporary Art (Ghana) and Nubuke Foundation (located in East Legon) are beginning to turn the city into an art capital. This dream is taking shape through the recent Accra Art Auction, ‘Accra-Can’ art initiatives and the well established ‘Environmental Film Festival of Accra. Nevertheless, this may not be realised on the same scale as Kumasi, Ghana’s second city, which is a cultural city with over a hundred Art & Sign street painting studios. In Accra and Kumasi, city authorities have repeatedly cleared them away. Surprising aspects of the city, near the Kwame Nkrumah Circle, are the installations of shoes, bags, and so on, found on pavements. (See photo). 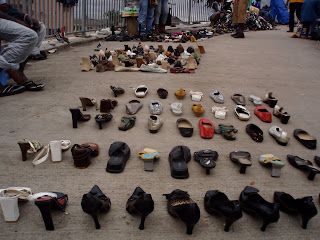 For many people in positions of power, their concept of modernity is a Western one rather than recognising and understanding, and utilising the local bottom-up dynamics of the city. This is a resource of modernity. The kiosks that crowded the sidewalks gave the city character, its African personality and were removed by the Accra Metropolitan Assembly when they ‘cleaned-up’ overnight forcing many painters to relocate.

The street arrangements actually embody the city’s natural architecture so the way people put kiosks together is part of their language; it becomes clear that they are being forced to become something else. This is a resource of modernity. The landscape is as much a part of the heritage of Ghanaians that ought to be preserved for future generations instead of being desecrated by plastic bags, filth and squalor. Artist, Enoch Tei Huagie’s efforts to recycle the ‘pure water’ plastics into fashion (bags and clothes) is indeed laudable.