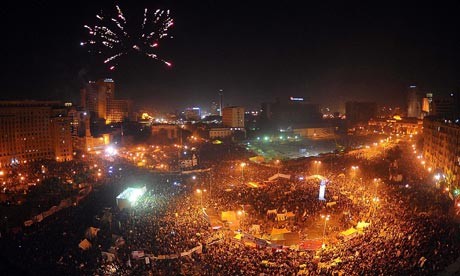 A year after the overthrow of Egypt's Hosni Mubarak, protesters return to Tahrir Square to hold the military to account

The final approach to Qasr el-Nil bridge on Zamalek island runs past a series of shaded gardens surrounding the national opera house, a rare patchwork of green amid Cairo's fume-choked Tarmac quilt. Mahmoud Hamdy remembered walking down this same road exactly a year ago to the day, heart pounding and eyes burning, as thousands of anti-regime protesters burst through police lines and struck a fatal blow to one dictator's three-decade aura of invincibility.

"I felt so confident that afternoon, almost dizzy," said the 24-year-old. "But when we reached the bridge there were lines of security troops blocking our way. They were there again on 28 January, making their last stand against the people.

Twelve months later Hamdy once again found Qasr el-Nil impassable as he tried to make his way towards the capital's main square, the name of which has now become globally synonymous with occupation, resistance and revolt.

This time though it wasn't Hosni Mubarak's hated security forces blocking the way but hundreds of thousands of like-minded fellow citizens, all intent on converging on the same plot of land. They waved flags, held aloft placards, sang and danced and raised their fists in memory of the martyrs, filling first Tahrir, then all the traffic arteries leading into it, and then all the capillaries that branched off from them, until central Cairo – its buildings, its cars and, on Wednesday, its overwhelming volume of people – coagulated into one big revolutionary clot. "These are the Egyptians," nodded Hamdy approvingly. "This is how we speak our mind."

In the 365 days since Egypt's revolution erupted with a breathtaking shudder on to the world stage, the gap between its hopes and its achievements has yawned wide for Hamdy. Like so many others, he watched friends die, first in the struggle to bring down Mubarak and then again in the multiple uprisings that have taken place since, targeting the regime-friendly generals who replaced him.