"A year later. Arab cinema at the time of the Revolution" 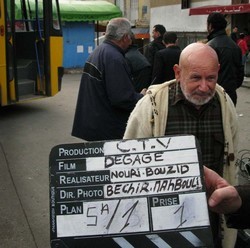 In Egypt the film balance sheet is meager : film-makers are still blaming the revolution of January 25 for this lack of production, which has been halved, 40 films were made last year as opposed to 18 this year. Only 10 films have been shot since the revolution.

The balance sheet for Tunisia, the precursor to the Arab revolutions, has been quite positive, with a more abundant and rich production which has gone from five to ten films. "This year we have produced ten films and this is a considerable number for Tunisia, even though most of them are not about the revolution and the rest were written before Ben Ali’s escape", noted the comedian Nadia Boussetta who starred in Histoires tunisiennes and is currently about to appear in a film by the director Mohamed Demq. For singer and comedian Yasmine Aziz, this growing level of production is a sort of rebellion, Ben Ali having muzzled everything through censorship. The director Nouri Bouzid, for his part, is waiting for the cinema release of his new film, while Elyes Baccar has just presented his documentary about the Tunisian revolution, Rouge Parole.

Syria also continues to boom as it started to two years ago. The production of Syrian films has gone from two films in 2010 to five this year. A fairly weak number for a cinema  industry which has bequeathed some great names such as Moustapha Al-Aqqad, who directed the film Al-Ressala, Mohamed Malas as well as the comedian Kenda Allouch. The latest arrival in Syrian cinema is the feature film by Saïd Joud, Mon dernier ami. For him the pursuit of work is a challenge to the events currently taking place in Syria. Syria has also presented a further four films this year, including Nawafez lelroh (the windows to the soul), by Ammar Al-Ani, starring Gamal Soliman in the role of someone who recollects his past and unveils Syria’s history.