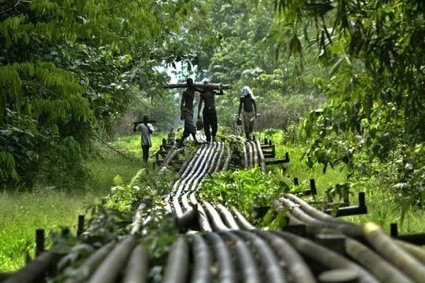 On Tuesday evening, George Osodi gave a talk at Foto8 in London then had a public conversation with Julian Stallabrass. I discovered Osodi's amazing photos at the last edition of Documenta and there was no way i'd miss his presentation.

The Nigerian photographer is one of those rare photo-reporters whose work is shown in newspapers as well as in art galleries around the world (you can check his photos right now in the Oil Show at HMKV in Dortmund). He was in London to discuss the Oil Rich Niger Delta series and his new book Delta Nigeria - The Rape of Paradise on the oil exploitation in the Delta region of his country.

Nigeria is West Africa's largest producer of crude oil but years of corruption and poor governance has left the southern Niger Delta desperately poor, its environment devastated by oil spills and gas flares and other environmental hazards as a result of activities of the oil companies in the region.

The story of Oil Rich Niger Delta started almost 10 years ago when Osodi decided to leave his well-paid job as a banker to buy a camera and teach himself photography. It didn't start too well. First of all, no one in Nigeria, he said, takes photography seriously and he received no encouragement from neither his friends nor his family.