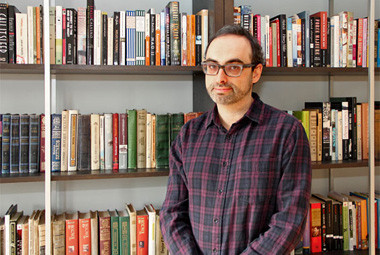 Six writers and their book-collecting habits

I’m big on sniffing books. The old Soviet ones really have this strong smell, reminding me, for some reason, of tomato soup in a cheap Soviet cafeteria.

The oldest book in my collection is one of the first books I read as a four- or five-year-old. A Swedish children’s book, in Russian, the title of which translates as The Adventures of Nils and the Wild Geese. The book began to fall apart from many readings and is lovingly wrapped up in layers of Soviet masking tape.

Nabokov’s Pnin is very important. A work that is so humane and at the same time hilarious. But let’s not forget my full collection of Sopranos DVDs. This is storytelling for the new century.

Some books are so good they are slightly lumped together, the Nabokovs and Roths, for example. But mostly I want to be surprised every time I look at the shelves. Who knows where anything is?